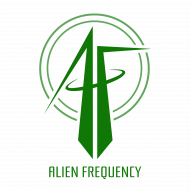 Alien Frequency started as a solo project by producer and musician, Revv, back in ’04-05. By '07 a few of his songs started gaining steam on Myspace.

The first live performing version of AF was formed in 2008. Some lineup changes, folks moving and mistakes later, Revv and then bassist, Mark Moore (formerly of Crush Groove) released their

first EP, Modulation, with Mark on bass and Rev on pretty much everything else, in 2015. The EP received plenty of praise, though Revv was ready to pull the plug on AF. Then, vocalist, Neal White would join, and later Troy “T-Rex” Roberts on drums to form a new live lineup.

Several successful shows later, and Mark, then Neal would be ousted, due to their personal demons. Revv’s older brother, Schmidty (bassist) and Chad Alien (vocals) would fill those espective roles. In July 2020, Eric “Enoch” Hatten, formerly of Big Ugly would then join as 2nd guitarist to finally fill out the strongest lineup the band has seen, by far. Most in-studio keyboards and Alien Frequency’s logos are by Aaron Moses (AKA Trip). Music production by Revv.

Deciding the songs off Modulation could use an overhaul, with the band’s new lineup and more aggressive sound, AF has completely re-recorded the EP, renaming it Remodulation, and is slated for a June 4th 2021 release on physical CD, and at a later date on streaming and digital platforms. The band is also recording

a followup called Evolve for a release later in the same year.

“Seventh Sense”, can both be heard on all major streaming platforms, and of course on the homepage of this website! 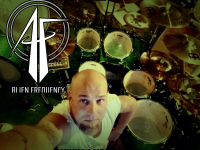 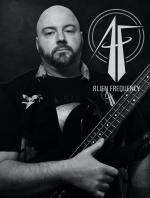 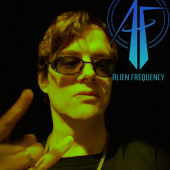 Find us anywhere on the web by searching #AlienFrequency